What is dry-aged beef? 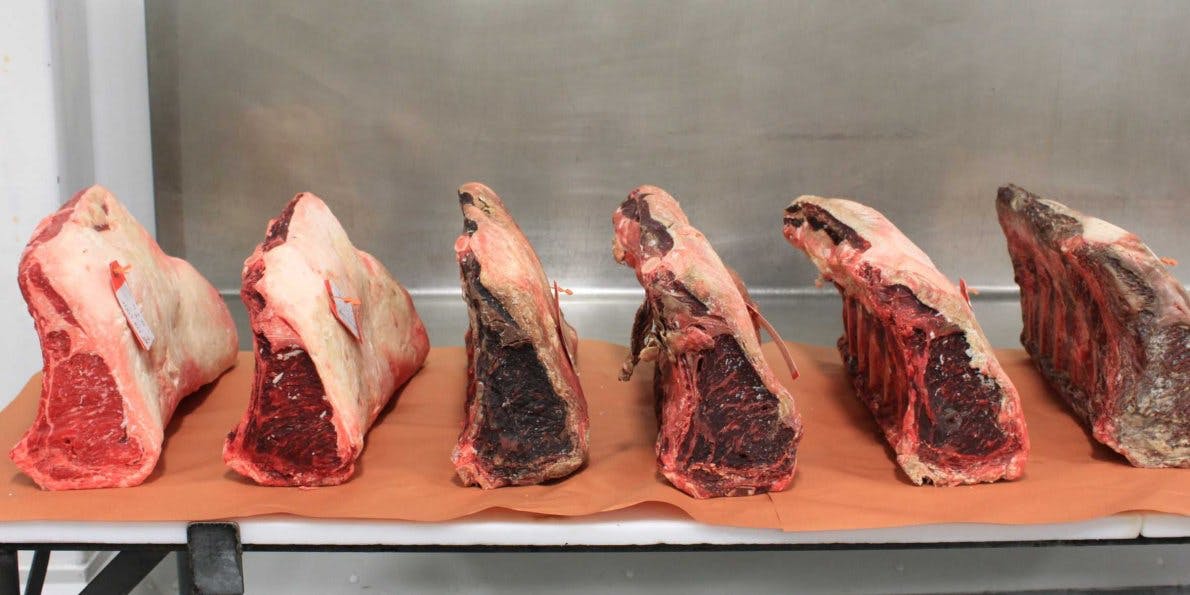 Long before dry-aged steaks became a hot-ticket item on steakhouse menus, people had been dry aging beef for centuries, often hanging joints of the stuff in cheesecloth or a burlap sack to keep it edible longer.

But by the 1800s, if not earlier, it was clear that preservation wasn’t the only thing dry-aging was good for.

Some people began to notice that, not unlike what happens to cheese when you let it sit in a cave developing colorful, fuzzy molds, time seemed to do something strange and magical to the taste of beef. It became much more tender, and its flavors got nuttier, mustier, much more complex.

No one was a bigger proponent of the process than Marie-Antoine Carême, the father of France’s grande cuisine, who is often credited with bringing French food into global focus. In his kitchens, Carême insisted dry-aging always be allowed to go on “as far as possible.”

Culinary eccentric though he might have been, Carême knew what he was talking about. The love of putrefaction, it turns out, has scientific credence.

In recent studies comparing dry-aged and unaged beef, panels of highly trained tasters ranked beef aged 14 days as being more intensely flavored and tenderer than the fresh stuff. The tasting notes that intensified were what the tasters called “brown-roasted” flavor and, somewhat less helpfully, “aged flavor.”

Chemical analysis backed their taste buds up, revealing a totally different volatile-compound profile in dry-aged beef by the two-week mark.

Beyond two weeks of dry-aging — as far as the tasters were concerned — yielded no more discernible improvements in taste, whether flavor or tenderness. But we would be remiss not to mention that some dry-age devotees will strongly disagree with this! (If you can taste the difference in the 140-day aged steak on the steakhouse menu, good for you. Order it!)

So why is it that dry-aged steak is more expensive?

Well, think about it: It’s losing moisture as it hangs there for days on end, and water loss matters if you’re selling by weight (which all butchers do). To recupe the money he or she could’ve made by selling it unaged and heavier, they have to up the price per pound. Plus, time is money! It's expensive for the butcher to let it sit in their refrigerator room for weeks, unsold.

Lots of people feel the cost is well worth the added benefits, rather like the difference between a Bordeaux of prime vintage compared to its just-juiced cousin.

At the very least, dry aging is a fascinating process that really does change things up on a molecular level. But ultimately, tastes will always be a very personal matter. We’re just here to help you make sense of it all.

You can read more about those dry-aging studies I mentioned here.

Why is it important to know where your food comes from?

Ask anyone “if” it’s important to know where the food you eat comes from, and nearly everyone will say yes. Ask them “why, exactly?” and even the most discerning eaters will struggle to give precise answers. I... Read post »

Discover Craft Meat from Around the Globe!

Say goodbye to a world where angus beef reigns king. Craft beef is a worldwide phenomenon with terroir, breed, and practice unique to each region and locale. Check out some of the world’s most unique craft beef!... Read post »

A stroll through Thistle Creek Farm

If you visit Thistle Creek Farm in Tyrone, Pennsylvania like I did a few days ago, you'll wind up learning a lot about cows, soil microbial populations, and the local iron-forging history, all courtesy of ranchers... Read post »

From left to right, A5, A4, A3 cuts of Olive Wagyu Every country operates under different practices for grading their beef and identifying the best of the best. I've explained a little bit about the USDA grading... Read post »

On February 28, Crowd Cow is offering a limited amount of A5 Wagyu imported directly from Japan. A5 Wagyu contains higher proportions of healthy omega-3 fatty acids than Angus steak and is legendary for umami flavor,... Read post »

How to Hold a Steak Tasting

Much like fine wine or decadent cheese, no two steaks taste the same. Yet only modern meat enthusiasts nuance the flavor and texture profiles of craft beef, enjoying the local and specialized range of flavors between... Read post »