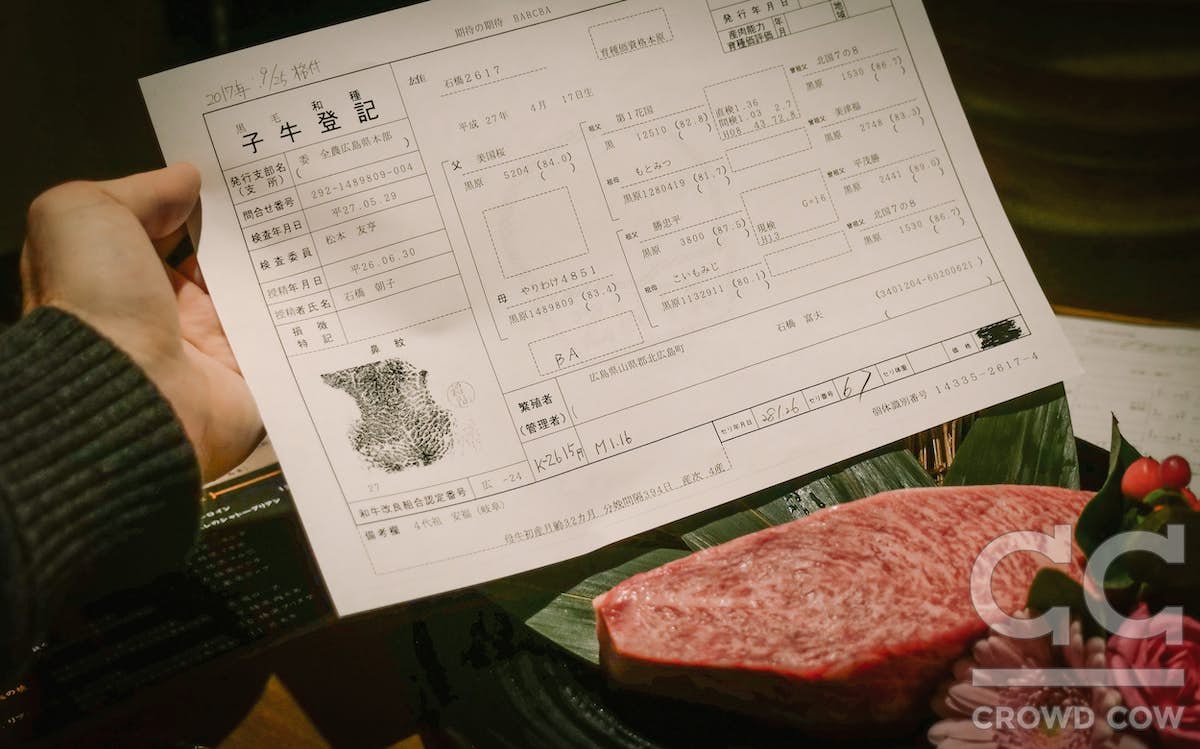 A few years ago, Chef Mori was a chef at a Yakiniku House (a traditional Japanese beef grill) in Osaka when he first heard about Olive Wagyu: a rare Wagyu beef produced by feeding inawara rice straw, Italian rye grass, and toasted olive lees to Kuroge Washu cattle. It's only raised by a handful of producers in Japan and originated on a remote island called Shodoshima in Japan's smallest province. It piqued Chef Mori's interest, and would eventually lead him to found ICHIGO, a small, Olive Wagyu-only steakhouse in the heart of Olive Wagyu country.

“I was shocked," Chef Mori told me (in Japanese), remembering his first taste of Olive Wagyu.

"This beef blew me away. The umami was intense and the quality exceeded even the best Matsuzaka beef I’d ever tried. It felt addictive. I needed to try it again the next morning." He was so hooked he decided to uproot from his job and life in Osaka and move to Kagawa, Japan's smallest prefecture, where he wantaed to start Japan's first Olive Wagyu steakhouse close to the very farms where the beef comes from.

Now, his steakhouseICHIGO, located outside of Takamastsu city in Kagawa, is two years old and serves nothing but Olive-fed Wagyu. Chef Mori personally sources one animal at a time from local producers on Shodoshima Island, and finds a use for every part of the animal.

He serves up premium steaks, oxtail soup, meatball, raw takaki and even brisket (which, unlike in the U.s., isn't favored in Japan), and dry-ages many cuts up to 30 days (also an unusual move in his home country). Right now, ICHIGO is the only steakhouse of its kind in the world, but Chef Mori aims to expand eventually, at least in Japan. 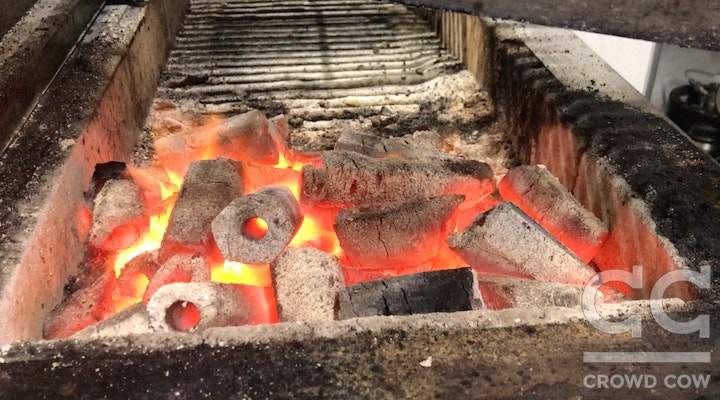 Olive-fed Wagyu originated 10 years ago through the ingenuity of a single small farmer, Masaki Ishii (age 68), who was driven by the idea of creating, in his words, the "best tasting and healthiest beef." But he was also developed this rare steak out of necessity.

Ten years ago, cattle producers in remote Shodoshima were struggling. They were at a distinct logistical disadvantage to other Japanese farmers who sought to export their high-rated steak, because from their island they were a two-hour ferry ride to the nearest small town, and and another two-hour train ride to a big city. Cattle producers on Shodoshima simply couldn't compete against premium beef brands like Kobe beef, even though their steaks were just as show-stopping. 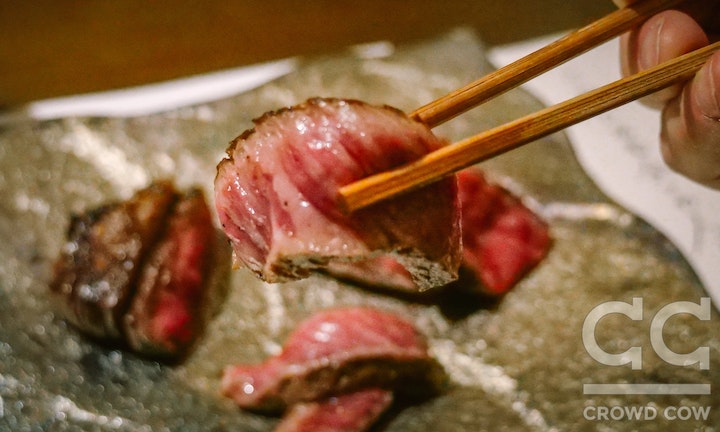 But Shodoshima and Kagawa had a few things going for it — over 1300 years of cattle rearing history and Japan's oldest and most fruitful olive orchards. Ishii-san took three years to work out a formula: He took the pressed olive lees leftover from olive oil production, and dried them to make them sweeter and more palatable for cattle.

He combined the dried olive feed with Italian rye grass and inawara rice straw, creating a mostly-forage feed that the cattle love. The dried olives are only added to their diet during the last two months, when they impart the antioxidants and subtle flavors that creates the signature taste and texture of Olive Wagyu.

Ishii's customers recognized the difference right away, and word caught on about his special beef. His goal was to create a tasty and healthy beef that could command a better price and help struggling farmers in the area succeed. That's why he decided to open-source his formulas for this special new feed, create a co-op, and encourage cooperations between olive growers and cattle producers throughout Shodoshima and Kagawa. 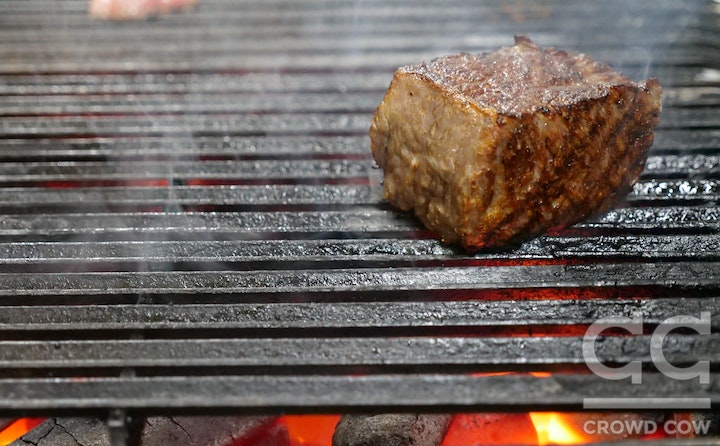 I have a feeling this beef is about to get big. In September at the Wagyu Olympics held in Japan once every five years, it came out of the woodwork to take the top prize for best fat quality due to the high oleic acid imparted from olives.

But with only 2,200 olive-fed animals that can qualify as Olive Fed Kuroge Washu, and distribution for now limited to the local area and a handful of outlets in bigger cities in Japan, it's unlikely that many people will ever have a chance to try this extraordinary steak anytime soon.

Crowd Cow is proud to have worked with farmers and the governor of Kagawa Prefecture to make Olive Wagyu available for direct sale to consumers for the first time ever outside of Japan.

See also: Everything to know about Olive Wagyu

Kobe Beef is iconic. You could visit the Medina of Fez, a pool hall in Kiev or a village in the highlands of Papua New Guinea and ask almost anyone — and they would tell you they’ve heard of Kobe Beef. There are few... Read post »

We collected a bunch of fun Wagyu recipes from around the good ol' internet to give you some inspiration. Take a look, and happy cooking! Wagyu Steak with Wasabi and Tosa Joyu (soy dipping sauce), by Famous... Read post »

If you’re a true steakophile, you might have heard of Kobe beef. But even if you’re extremely in the know when it comes to exquisite steak, you’ve probably never heard of Olive Wagyu. It’s a small-batch variety of... Read post »

Press Release: Crowd Cow Beefs Up Cyber Monday with Savings on the Rarest Steak in the World, Olive Wagyu

Crowd Cow, the marketplace for craft meat, is offering $20 off select cuts of Olive Wagyu, the rarest steak in the world, on Cyber Monday. There are only 2,200 Olive Wagyu cows on the planet, all living on a handful... Read post »

A5 Wagyu from Japan is legendary in the beef world. Its unique genetics help it to produce the most insanely decadent, marbled beef on the planet. Beef this rich and marbled shouldn't be eaten like an American Angus... Read post »

Japan produces some of the most outrageously marbled, incredibly decadent beef on the planet. And because of that, there are a lot of people outside of Japan who use the words "Wagyu" or "Kobe" or "American Kobe" to... Read post »

Olive Wagyu is the world's rarest beef. Produced by a handful of farms in Japan's remote Kagawa Prefecture, less than...
Watch now »